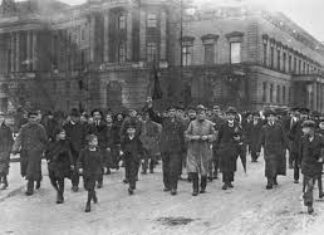 Message of CIPOML – The International Conference of Marxist-Leninist Parties and organisations – to Arbeit-Zukunft, Germany, on the occasion of the centennary of the 1918 November revolution

In the great epic of the struggles of the international working class the November revolution 1918 of the German workers and revolutionaries holds its own prominent place as a heroic attempt to realise the ideals of the working class and socialism of a society, and indeed a future, without exploitation, exploiters or exploited.

Protesting the barbarous imperialist war going on since 1914, the hunger and misery, and intent on ending it by establishing another social system, the call for revolution sounded from Kiel. Workers’ and soldiers’ councils were established in many places. Only days later, on November 9th 1918, the socialist republic was proclaimed in Berlin.

The German workers chose the road of revolution having experienced the blatant betrayal of the old Social Democratic party that sided with its own bourgeosie, its own capitalists, during the first world war. The conditions for revolution were ripe, the revolutions of 1917 in Russia set the example. The defeat of the Emperor in the war signalled the end of the monarchy itself.

The times at the end of the world war and the first years after the victorious October revolution in Russia were dramatic. The war redrew the map of Europe and brougt an end to four empires – Russia, Austria-Hungary, Germany and the Ottoman empire. Great workers’ movements and socialist revolutions were knocking on the doors of capitalism.

A new page in German history was opened when the sailors in Kiel refused to continue the imperialist war, raised the red flag and turned their weapons against the officers.

The November revolution, that engaged millions in the struggle to overthrom the rulers and the ruling class, would – If succesfull – mean a mortal threat to the entire capitalist world order. It showed that revolution and socialism was not only a question raised in more backward countries, but directly in the heartlands of capitalism and imperialism.

The defeat of this great attempt at revolution came about not as a result of lack of support of the workers or from lack of popular support in general. It was a genuine workers’ revolution, a popular uprising with the support of the class and the popular strata – and evidence of the proletariant revolutionary character and aspirations of the German working class. It was brutally repressed, also by murdering its two outstanding leaders Karl Liebknecht and Rosa Luxemburg.

Social democracy, opportunism and reaction would exploit its weaknesses to prevent its victory. But the November revolution provided a valuable heritage of the German working class in its struggle throughout the last century untill now and deserves to be studied also today.

One major reason why the objectives of the revolution were not achieved and of its suppression was the lack of a strong revolutionary workers’ party, of a leninist party able to lead it. The struggle to create and sustain such a party is an ongoing struggle and the first condition for the victory of the revolution and the construction of socialism.This is rightly also at the center of the struggle of the communist revolutionaries today. The heroic November revolution of 1918 in Germany remains a valuable lesson.

The International Conference of Marxist-Leninist Parties and Organisations greets the celebration of this centennary, organised by the German member of the Conference – Arbeit-Zukunft. We wish you new successes in the building of a genuine Marxist-Leninist Party in Germany, upholding an carrying on further the red banner of the great revolutionary struggle in Germany, continuing the work of Marx and Engels, Karl and Rosa, and countless other revolutionaries.

LONG LIVE THE STRUGGLE OF THE GERMAN WORKING CLASS FOR REVOLUTION AND SOCIALISM!

The message in danish
100 ÅRET FOR NOVEMBERREVOLUTIONEN I TYSKLAND – Til Arbeit-Zukunft, Tyskland

The International Conference of Marxist-Leninist Parties and organisations in Europe